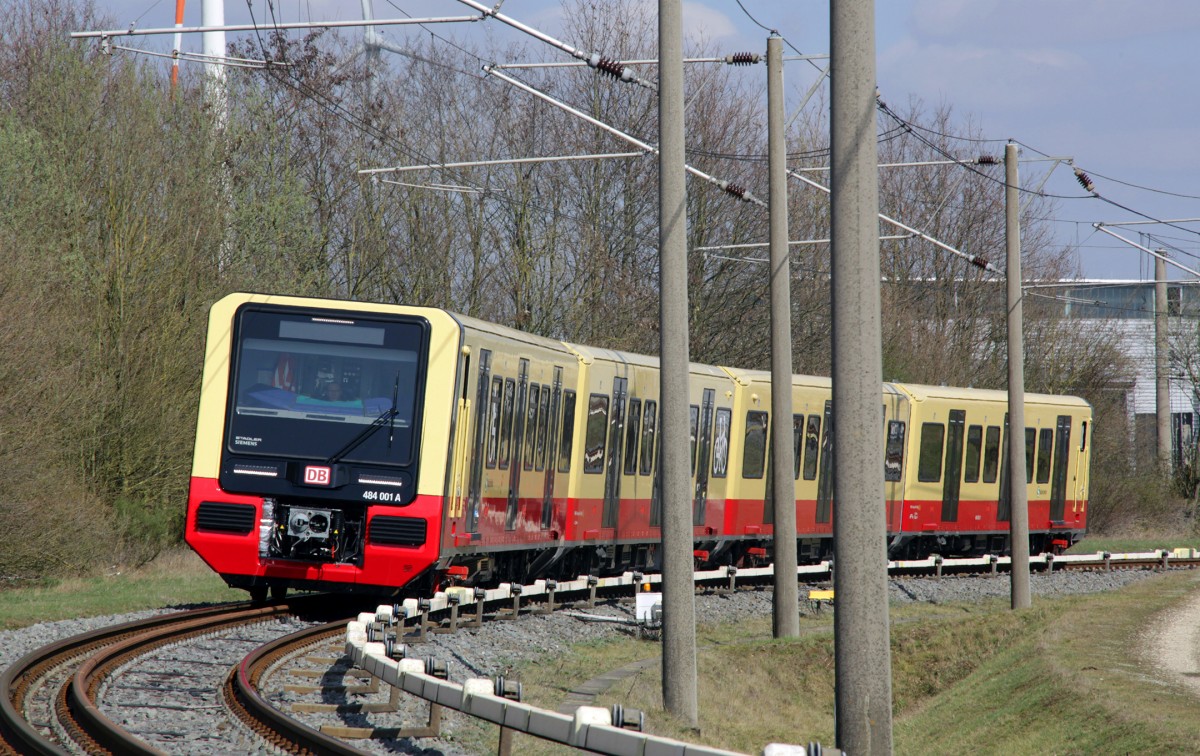 The FINANCIAL -- The New Year is starting off with a premiere! Shortly after midnight on January 1, the first train of the new series 483/484 S-Bahn will start passenger service in Berlin.  Residents of Berlin and Brandenburg can now look forward to brand new trains providing more space, large panoramic windows, air conditioning, security cameras in all cars, direct voice connections with the security center, fingertip service access for wheelchair users, and modern passenger information displays.

According to Siemens officials, the premiere train (serial numbers 484-001 and 483-001) with six cars will roll out of the Schöneweide station on New Year’s Eve. A paired male and female team of drivers will operate the new S-Bahn train on line S47 to Spindlersfeld. During the day, two more new trains will supplement service on the route between Spindlersfeld and Hermannstrasse.

“Our passengers can look forward to a completely new travel experience - a gliding on rails. These are the most comfortable trains in the long history of the Berlin S-Bahn. Together with Siemens and Stadler, we have been working towards this moment for five years - we closely accompanied the production, testing and acceptance of the trains and prepared ourselves intensively, including training train drivers and employees in the Grünau workshop on the new trains." S-Bahn CEO Peter Buchner.

A total of ten pre-series trains will enter passenger service beginning with the New Year. These trains will provide a stream of further data and experience that can flow into the series production, which has already begun. The new trains will operate on the Ringbahn system based on the new transport contract with the states of Berlin and Brandenburg that takes effect on January 1, 2021. S-Bahn Berlin has ordered a total of 382 cars (21 two-car and 85 four-car units) from the manufacturing consortium of Stadler and Siemens that are to be delivered by the end of 2023. In addition to operating on the S47 line, the new trains will also be used on the S46, S8 and S41/S42 lines.

"With the new generation of S-Bahn trains, comfort, reliability and performance are significantly increased. S-Bahn travel will become more attractive and even more barrier-free. More modern S-Bahn carriages will follow in the coming years and make it easier for passengers to switch to public transport. This will accelerate climate protection and the change in modes of transportation,"Regine Günther, Senator for Environment, Transport and Climate Protection

"The brand-new S-Bahn trains are good news for commuters in the capital region. The new series adds additional vehicles to the S-Bahn fleet as well as are creating more transport capacity. The customer will notice it. The trains are modern, more comfortable and safer. This also shows how a participation of customers and associations in the development process of the vehicles can be implemented successfully."Guido Beermann, Minister for Infrastructure and Regional Planning for the State of Brandenburg.

"The new S-Bahn will not only enrich Berlin in terms of transport, but will also bring much better quality, especially for passengers. Especially now in times of crisis, it is important to set an example. With more space, safety and punctuality, the new S-Bahn will make public transport in the VBB region more attractive and better. This makes it easier to switch from the car and also helps the important and necessary change in transport. Congratulations to the Siemens / Stadler manufacturing team and of course to the entire S-Bahn team around Peter Buchner!"Susanne Henckel, CEO, Verkehrsverbunds Berlin-Brandenburg (VBB).

According to Siemens, from the fall of 2018 to spring 2020, the trains were extensively tested at the world’s largest test center for rail vehicles, the Siemens Mobility Test and Validation Center (PCW) in Wegberg-Wildenrath, in the state of North Rhine-Westphalia. These tests included, for example, measurements and type tests for derailment safety, brake tests to measure braking distances, and tests for electromagnetic compatibility (EMC).

A four-car train underwent a 12-week climate testing program in Vienna, Austria, beginning in the fall of 2019. In the Rail Tec Arsenal (RTA), the world’s longest climatic wind tunnel, extreme temperature and weather conditions were generated at the push of a button. The train and passengers were subjected to realistic simulations at temperatures ranging from -25 degrees Centigrade with ice and snow to +45 degrees Centigrade and blazing sunshine. In these extreme tests, it was possible to check whether the pantographs worked even in heavy snowfalls and icing conditions, if the doors functioned reliably, and the retractable steps operated flawlessly.

The pre-series trains have been tested thoroughly in the S-Bahn Berlin network since September 2019, completing around 150,000 test kilometers and operating on every part of the 340-kilometer system. During these runs, extensive tests were carried out on various components, the train’s driving characteristics, brakes, passenger doors, heating and air conditioning systems, windshield wipers, lighting, train control systems and much more.
During these months of testing, 114 train drivers were also trained to operate the new series, since the trains use far more advanced technology than the system’s older units.

Full approval for using the trains for passenger transport was granted by the Federal Railway Authority in October 2020.

Siemens Mobility and Stadler are both deeply rooted in Berlin, and together we have designed and built a train for S-Bahn Berlin that will operate with the highest reliability for decades and have top technologies. The new trains combine cutting-edge technology and robust redundancy-assured quality with improved passenger experience and greater comfort for Berliners.”Albrecht Neumann, CEO of Rolling Stock, Siemens Mobility says.

“With the new S-Bahn trains, Stadler and Siemens are delivering ultra-modern “Made in Berlin” units that are precisely tailored to the requirements of S-Bahn Berlin and its passengers. The first-time use of air conditioning systems, improved options for storing luggage and packages, and a significantly quieter ride make traveling in the trains more comfortable and convenient. And thanks to their redundant traction system, the trains are far more robust and reliable.”Jure Mikolčić, CEO of Stadler Germany.

The FINANCIAL -- The World Bank approved a re-allocation of US$34 million under the existing Lebanon Health Resilience Project to support vaccines...

Why do COVID-19 vaccines require two doses? Will I still have to wear a mask and practice social distancing once I get the vaccine? If my friends...

The FINANCIAL -- The Centers for Disease Control and Prevention is expanding the requirement for a negative COVID-19 test to all air passengers...